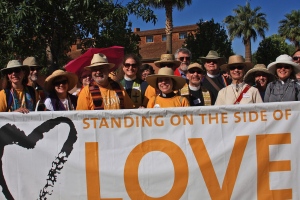 Early on Friday, May 28th, I left the cool breezes of California for the arid heat of Arizona, picking up three colleagues along the way.

When we arrived 9 hours later we were greeted with warmth and joy by the members of the Phoenix area congregations – fed amply, and graced with moving music and personal stories from people whose lives and families have been deeply and directly impacted by unjust immigration laws.

Immigration is a complex, emotionally-laden topic.

Signs carried by participants spoke to many issues:  the “unconstitutionality” of Arizona’s new law; the “paradox” inherent in having the descendants of those who took this land from indigenous people deny them right of access and service; the absurdity of labeling human beings as “illegal”; “todas somos Arizona” (we are all Arizona); the injustice of being valued for “our food and music” and “condemned for doing the work you don’t want to do”; the historic “inequities” and “injustices” within America’s immigration system;  America’s “accountability” as designer of/participant in a global economy that undermines foreign cultures and economies, while siphoning off resources (tangible and intangible)…

That evening, I knew, other signs would be carried in Tempe, Arizona:  signs likely to express racial bias and intolerance, along with radical means of condemnation and segregation.

So many perspectives.  So much fear, pain and anger; hope and courage.

What became clear to me as I trod on, was that while I could easily stand behind almost all of the signs and slogans I saw bobbing in that day’s multi-colored sea of humanity – the one that spoke most directly to my religious and spiritual identity was the one pictured above:  “Standing on the Side of Love”.

It is Love that seeds, nurtures  and sustains us as human beings within this world.

And it is Love that should be at the core of all that we create, including our laws.

When those laws do not recognize the undousable light of Love within each one of us; when laws are created to divide us from one another and therefore from the truth of our inherent value (as happens when things like poverty wages, slavery, border walls and genocide are justified as “legal acts” – as they have been and are in various parts of the world at any given time), then they are, in my eyes, invalid.  An abomination.

This weekend in Phoenix was many things to many people.  For me it was a kind of baptism:  a coming of age.  An affirmation of the kind of questions I need to be asking myself, the values I need to see reflected in the world and will give my life to.

This is a beginning.  And I hope you’ll join me.

This entry was posted in Uncategorized and tagged SB1070, standing on the side of love. Bookmark the permalink.
%d bloggers like this: